The Development of Demountable Wall Systems Through Time 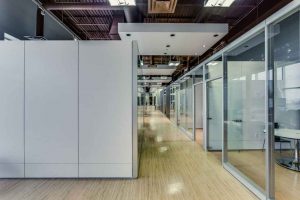 The demountable wall movement has been a slow motion revolution but one that has lately taken on a formidable head of steam. Companies large and small, perhaps pushed by the ever changing dynamics of the global marketplace, have begun to see the wisdom of designing spaces that can, among other things, change on the fly to accommodate fluctuations in staffing levels and the creation of workgroups to meet emerging opportunities. As these companies have investigated demountable wall systems as a way of increasing competitiveness they’ve also discovered that they can save a bundle on utilities in the process. In this post we’ll look at some of the reasons demountable walls met with some initial resistance and why they’ve taken off recently.

While it can be said with certainty that convention centres lead the way in the adoption of movable wall technology for the purposes of this post we’re going to concentrate on the role demountable walls have played in the evolution of the contemporary office. With that in mind let’s begin our trip down demountable memory lane.

If you’d like to learn more about demountable wall systems call IMT Modular today on 416-743-4513. We’ll be happy to answer all your questions and provide you whatever information you need to make an informed decision about adopting demountable walls for your office.

Previous Post: « 5 Errors to Avoid When Configuring Your Office Partitions
Next Post: How Movable Walls Enable Your Office to Become More Space Efficient »

IMT is a Smart Tint Distributor